Click on any photo to see a larger version...
There is a mini-gallery of all files Shayne sent at the bottom of the page 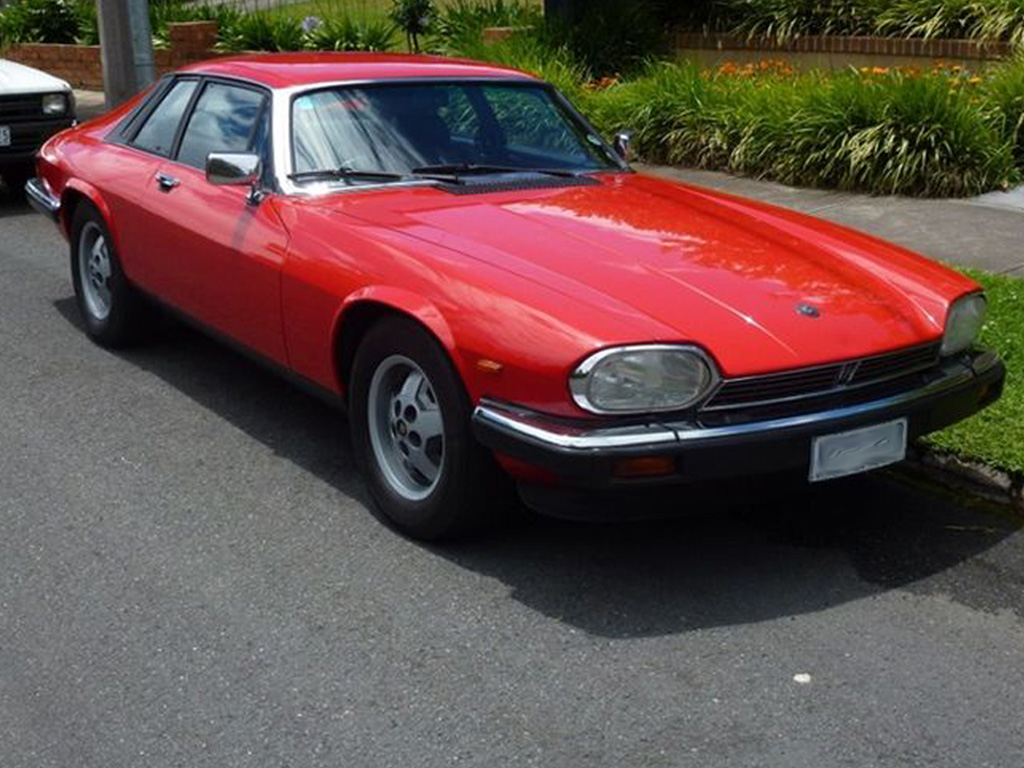 When Jaguar released the much anticipated XJ-S in 1975, expectations were high. Here was the car that would help a troubled Jaguar back from the brink. Here was the eagerly sought E-Type replacement. What happened in reality though, was the auto manufacturer’s equivalent of an awkward shuffling of feet, and some anxious hand wringing. This was not the car the public had been expecting. Where was the evolution? Where was the sports car? Where was the heritage that Jaguar had fought so bravely to nurture since the 1940’s? Plain and simple, everyone was stunned. Where Jaguars loyal customers had been longing for a lithe, nimble sports car, they got a fat, squat, GT with those hideous ‘buttressed’ rear pillars. Such was the confusion, and dislike of the new car that it took a couple of years for the public to forgive Jaguar and for it to finally again acceptance.

However, like the story of the Ugly Duckling, this tale also had its happy ending. Ironically after a production span lasting 21 years, totalling some 115,000 units, and having received numerous improvements and enhancements along the way, the Jaguar XJ-S now remains one of the most sought after and treasured of the ‘Modern Classics’ available. 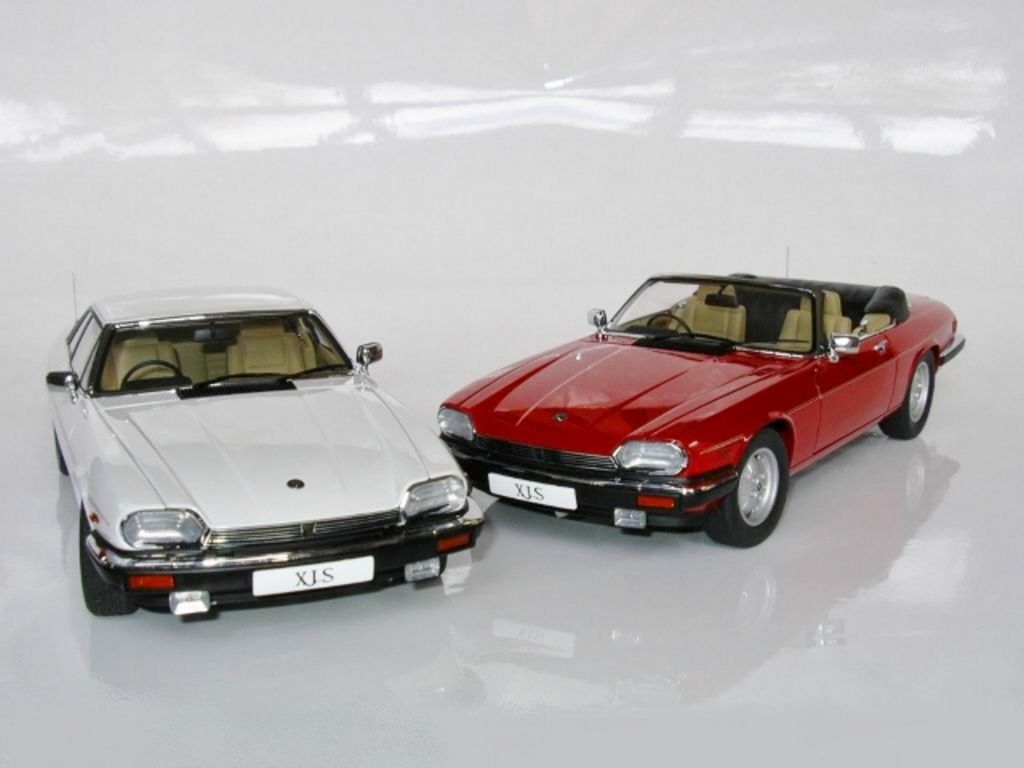 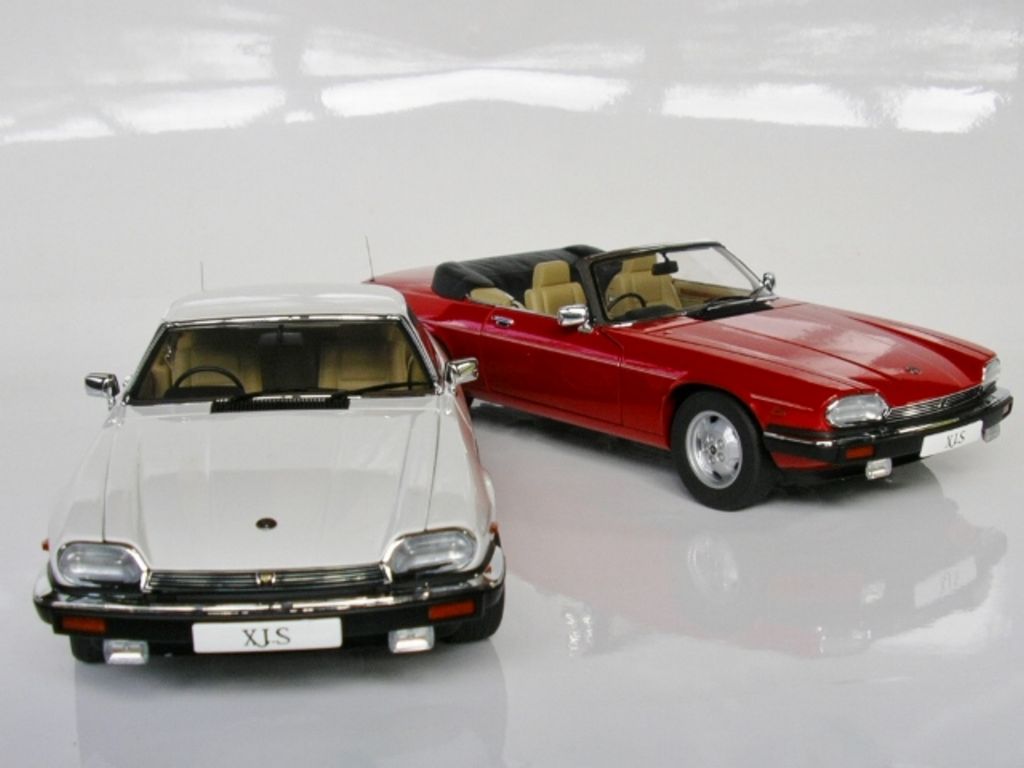 AUTOart have done a brilliant job capturing the lines of the HE version of Jaguar’s XJ-S, in both Coupe and Convertible versions. It’s a sad fact that many manufacturers sometimes compromise accuracy and detail for profit, but not so in this case. The HE stands for High Efficiency which came about in 1982 after engineers needed to improve fuel economy by redeveloping the cylinder heads on the 5.3 litre V12 engine. From whatever angle you view the car from, it just seems right. The body sits over the wheels at the correct height, the wheels filling the wheel arches just nicely, giving the whole model a long, low, purposeful stance, just like the real thing. Attention to detail is superb. Being a bit of a Jaguar nerd I notice the small things. Like all the badges for instance. The ‘Starfish’ alloy wheels have the correct centre cap ‘Growler’ emblem, the grille has the proper V12 badge, the bonnet and steering wheel both have their respective ‘Growler’ and ‘Leaper’ Jaguar badges, and I just love the ultra fine pin striping – so 1980’s! The only thing I can fault so far is at the rear, where the XJ-S and V12 badges on the boot lid, are only decals. On the rest of the body the detail is fantastic – right down to the headlamp washer wipers, the door handles, wing mirrors, boot lid plinth; showing the reverse lamps, and the aerial mast. Chrome work is faultless; the grille has had a wash of black to highlight its detail, and the windscreen, drip rail, waist rail and bumper mouldings are all depicted accurately. 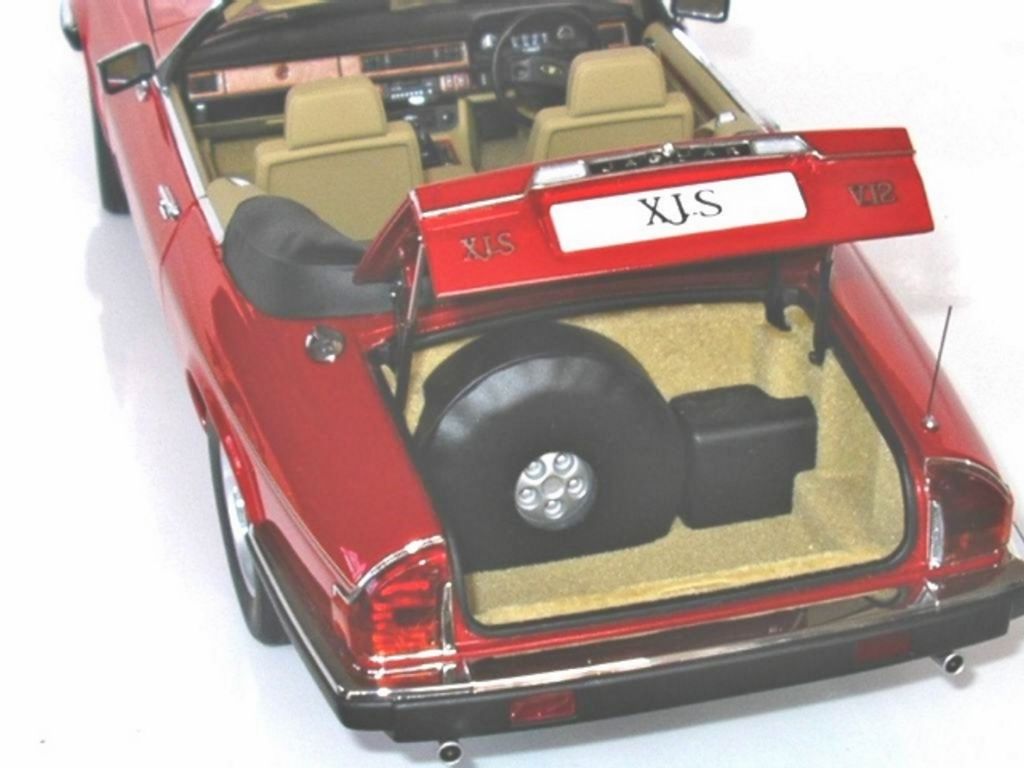 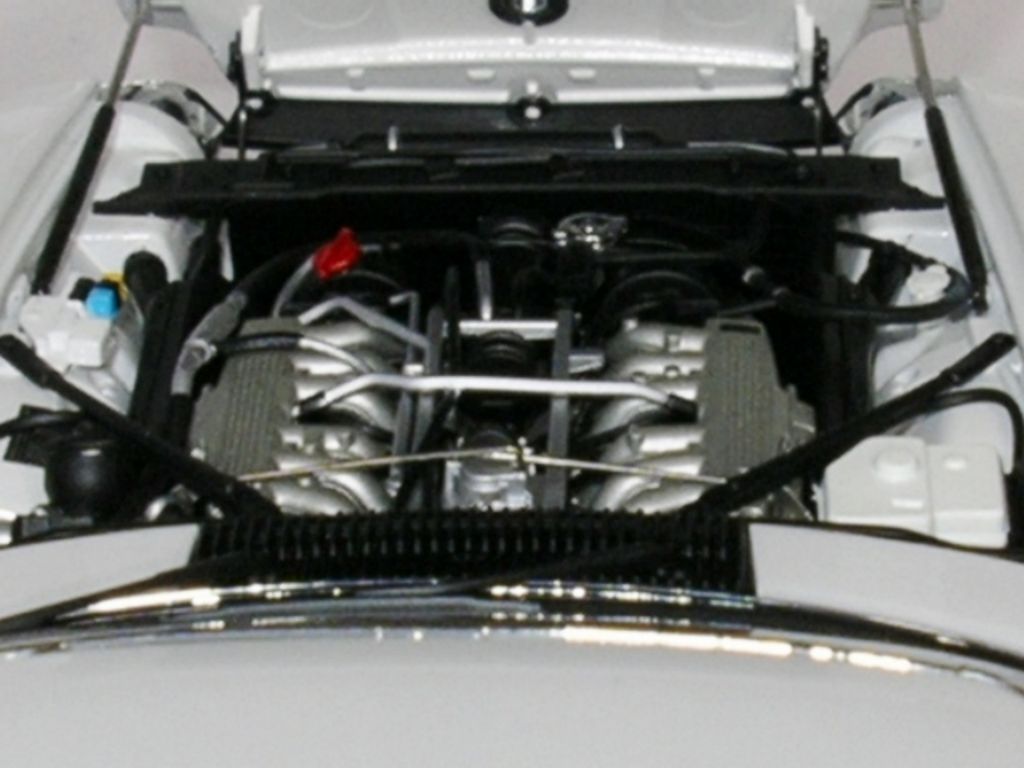 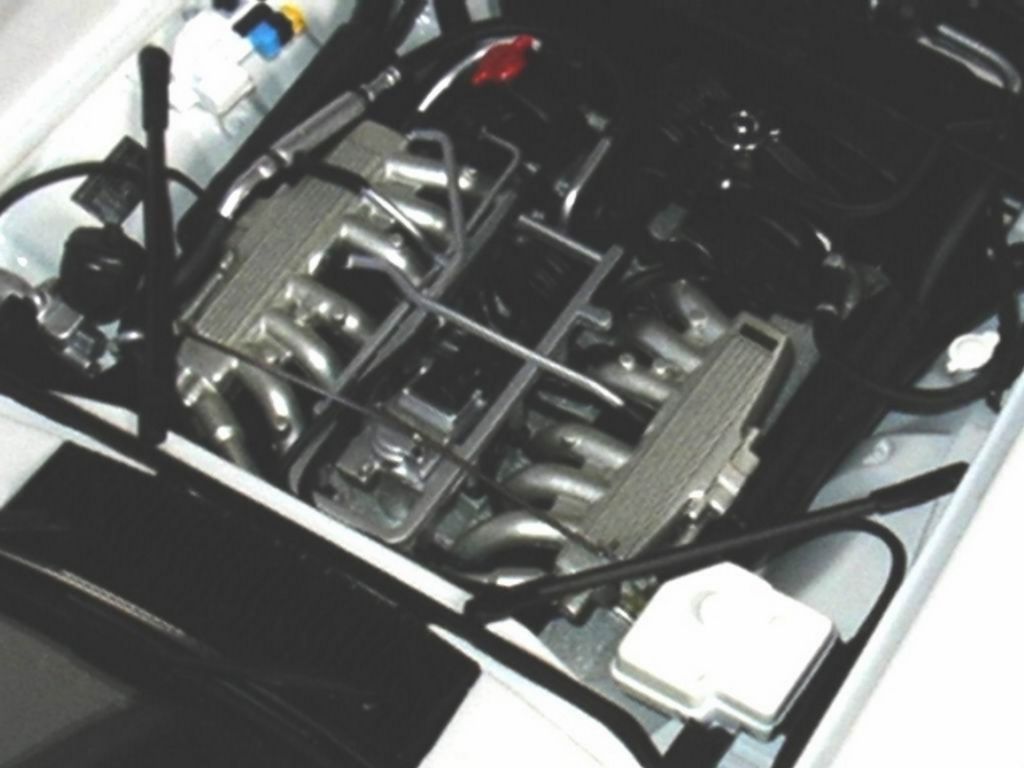 Of course, it goes without saying that both models have full opening features. Lifting the boot lid shows off a fully trimmed luggage area, dressed out in a flocked material, and which also houses the spare wheel (covered) and the battery (also covered). A nice touch is the realistic struts used to hold open the boot lid. It’s the same for the engine bay. The forward opening bonnet is held open by accurate looking struts using proper hinges and not the archaic cast dogleg hinges, so popular with manufacturers from days gone by. Thus the engine bay in all its finery is revealed. And what a vision it is. I had the luxury of comparing some photographs from a magazine and I am certainly not disappointed. All major components are present and correct. Obviously very fine items cannot be replicated, but there is still enough detail there to look realistic. Notice the fuel injection equipment and associated pipe work. The air conditioning hoses, washer bottle, air filter boxes and even the cooling fans can all be seen. A quick look underneath shows again, a faithful copy of the original. I am pleased to see the rear suspension accurately displaying the rear sub-frame, showing the inboard disc brakes and the dual coil-over spring and shock absorber set up. At the front end we see the engine sump pan and oil filter along with transmission and twin exhaust system - again, all faithfully reproduced. 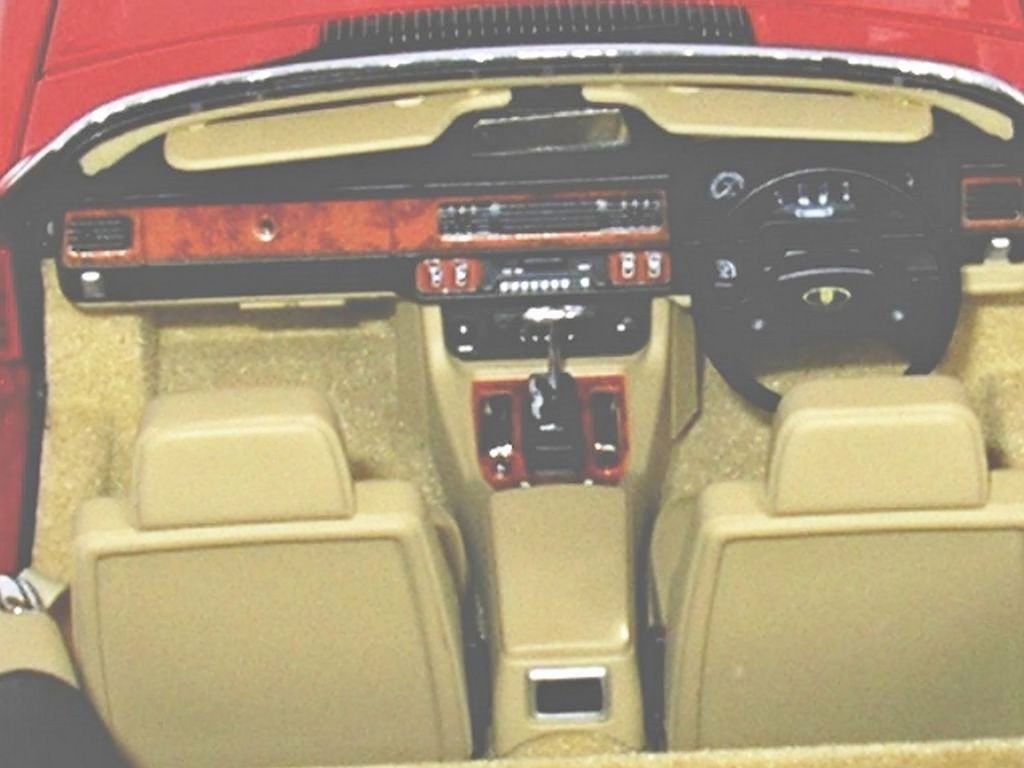 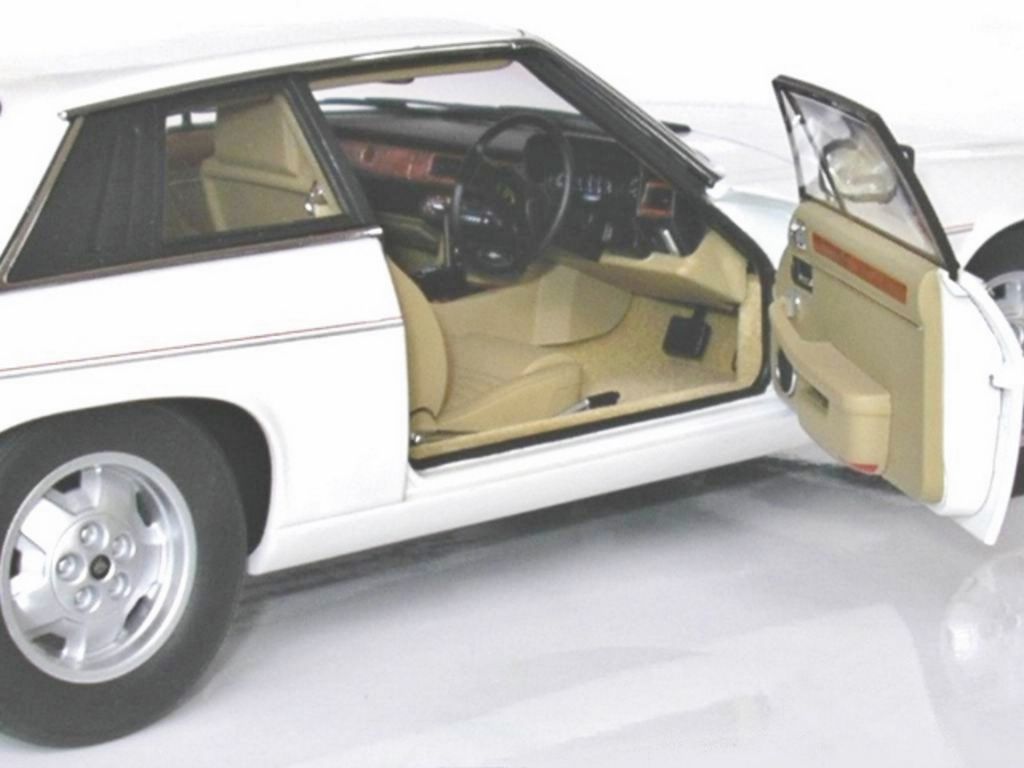 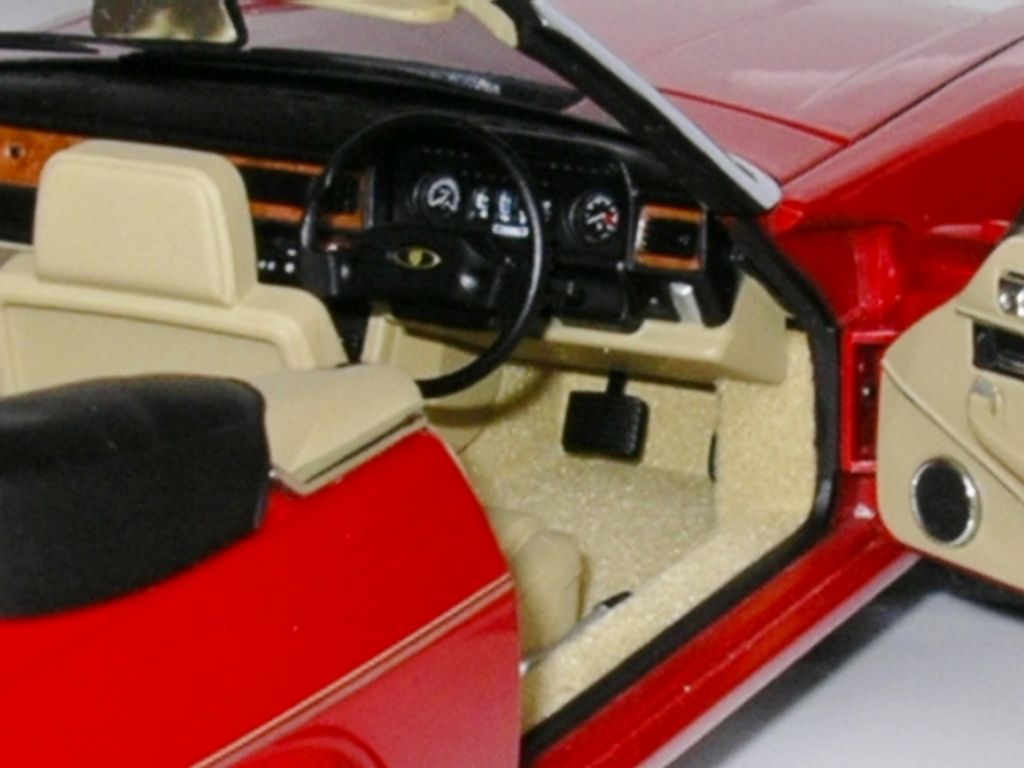 In producing a convertible version, AUTOart have had to give us the ‘Full Monty’ as far the interior is concerned. How many times have we seen manufacturers cheapen the quality of a model by scrimping and saving on the interior of a car because they know it can’t be seen fully? The detail shown in the XJ-S interior is, of course, superb. Of particular delight to this Jag nerd, is the application of walnut veneer to the dashboard, the centre console and door trims. Also, I am pleased to report, is that the multiple switches, radio and heater controls are all moulded in base relief, and not just decals. Instruments all seem to be correct including the ‘drum’ type minor gauges as on the real car. Of course the carpets are flocked again and the seatbelts are all fabric ribbon, even with tongues to provide more realism. It is interesting to note that while the coupe version has rear seats, though admittedly you would only seat children or Hobbits in there, the convertible only has a luggage tray-come-locker with a lift up lid, as the fold down convertible roof was deemed to take up too much room to have a seat. I suppose you have to have somewhere to put a carton or two of Pinot or Shiraz!!

Of course it’s easy for me to wax lyrical about cars of which I am especially fond of, but when we have manufacturers like AUTOart, who consistently provide us with fantastic accuracy and detail, model after model, and who have gained for themselves a reputation of being perhaps among the top 5 model producers, it becomes so much easier to describe and enthuse over these miniature automotive delights!!

BUT – that’s not the end of this story……

If you found yourself salivating uncontrollably after viewing the Jaguar XJ-S road cars; the coupe and the convertible, then you might just be ready for the ultimate show piece. AUTOart have reproduced for Biante of Western Australia, the 1985 Bathurst 1000 winning #10 Jaguar XJ-S, driven by John Goss and Armin Hahne, from the stables of the legendary racing team TWR (Tom Walkinshaw Racing). They have also produced the 3rd placed #8 car as well, as was driven by the great man himself Tom Walkinshaw along with co-driver Win Percy.

This story started in 1984 as TWR assembled and prepared a team of 4 cars to contest the fiercely competitive ETCC (European Touring Car Championship). Such was the success; the TWR team took out the ETCC title in that year. And so, boosted by that success, TWR sent a car down to Bathurst to test the waters for the 1984 James Hardy 1000. Sadly a starting line shunt put paid to a result that year, but undeterred, Tom Walkinshaw immediately planned a return visit for the following year. And this he did, bringing a team of three cars, to take on the might of Holden and Ford. History now shows that the #8 car of Walkinshaw and Win Percy took an early lead but had to pit on lap 128 to fix a broken oil line. The #10 car of John Goss and Armin Hahne took the lead and ultimately the chequered flag after gallantly fighting off the challenge from a pesky Peter Brock, who had the misfortune of having the timing chain in his HDT Commodore, break only three laps from the finish. 2nd place went to the BMW 635CSi of Roberto Ravaglia and Johnny Cecotto with the #8 car of Walkinshaw and Percy taking 3rd after completing the oil line repairs. 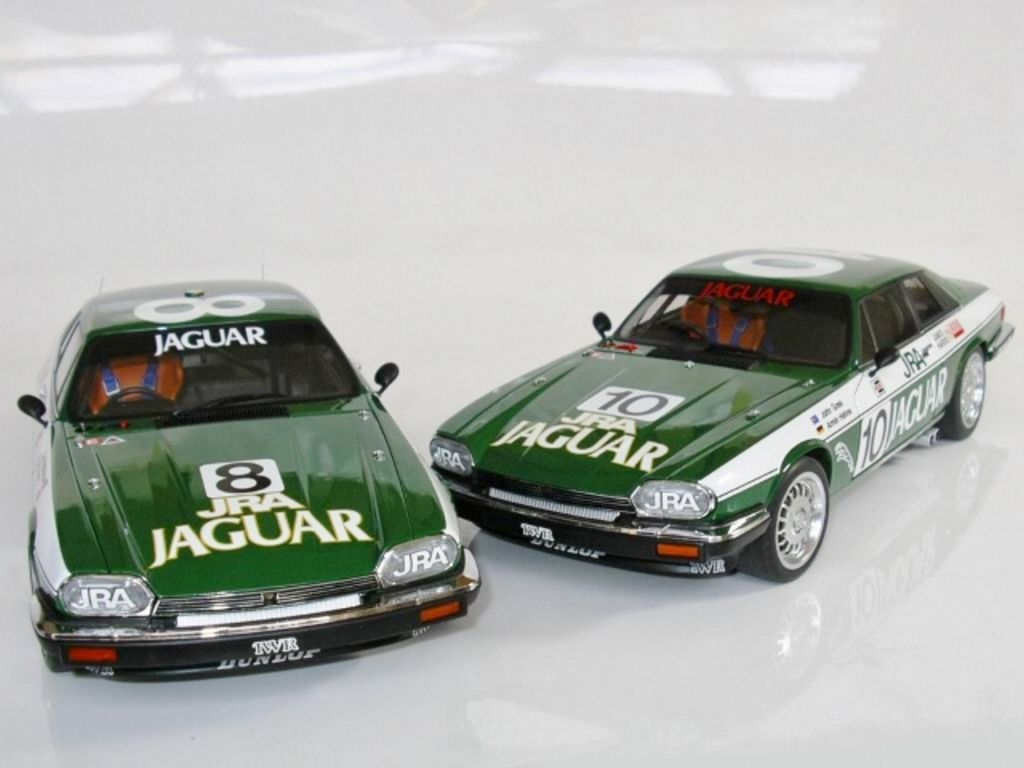 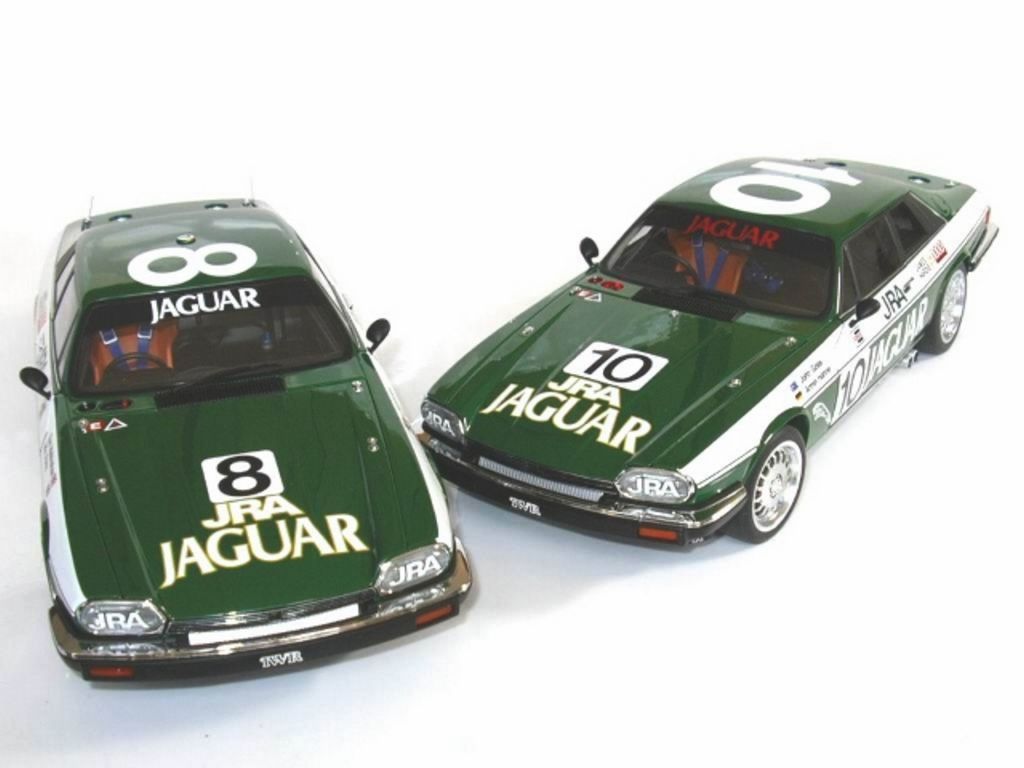 AUTOart have created a masterpiece with these TWR Jaguars. The extra detail and finish really have to be seen to be appreciated fully. The tribute to accuracy and faithfulness to the original, seen in these cars is a real credit to AUTOart. It would be a mistake to disregard this model as a tarted up coupe with a flash paint job, without taking time to inspect one carefully. Yes, it does have a fantastic paint job, the full TWR racing livery is superb with particular care taken with decal positioning. The most obvious changes can be seen at the rear with the inclusion of the twin fuel fillers for the huge boot mounted fuel tank. Also seen here is part of fire extinguisher set up and some of the high pressure fuel lines. Similarly, in the engine bay – additions include some large air ducting hoses to direct cooling air to air filter boxes, and some extra fuel piping to help feed the hungry 5.3 litre V12 engine, which in full race tune, was pumping out close to 500 HP. Also notice the locking pin sets on both the boot lid and bonnet. Although non functional on the model, the miniature R-Clips can actually be removed. 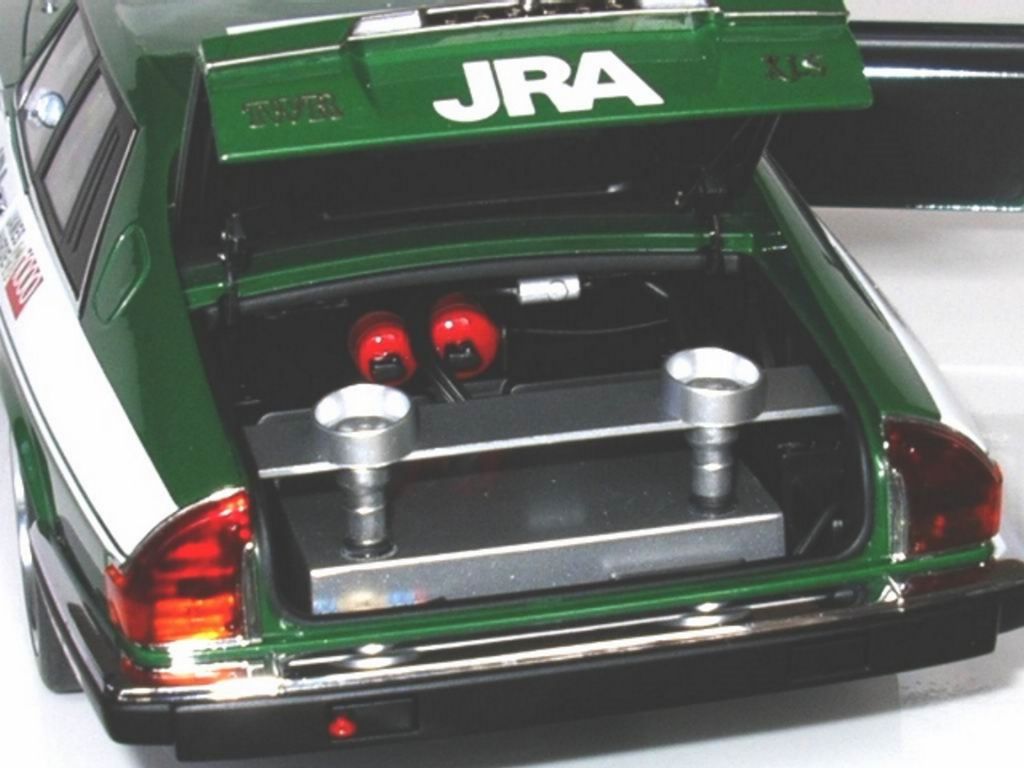 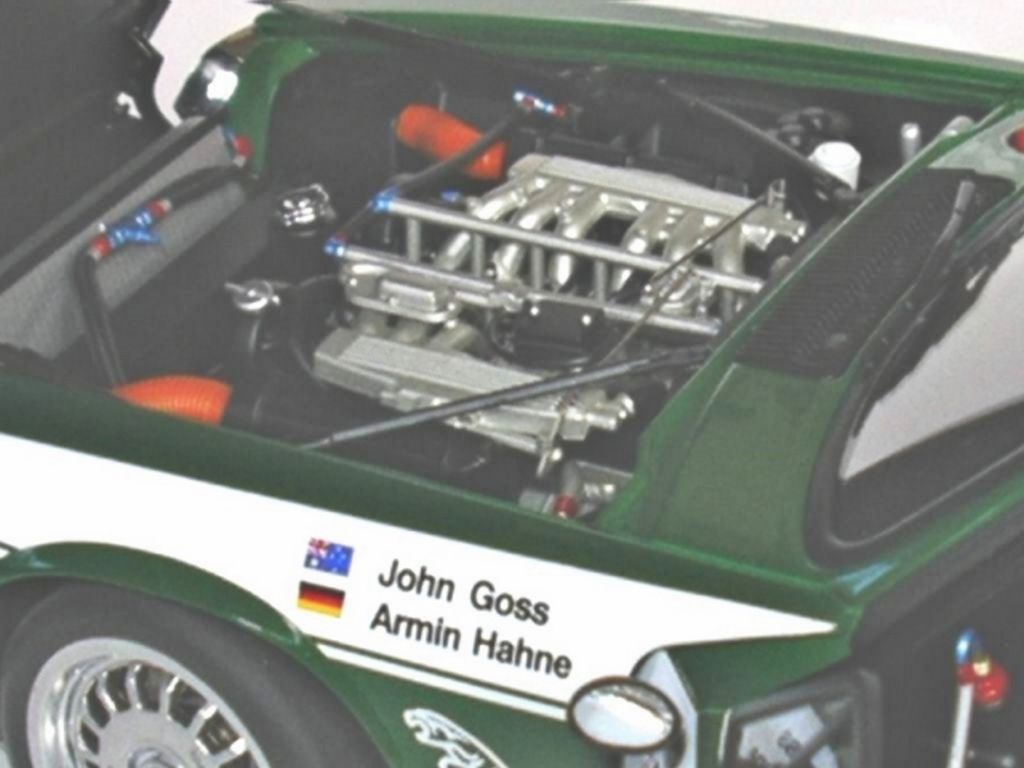 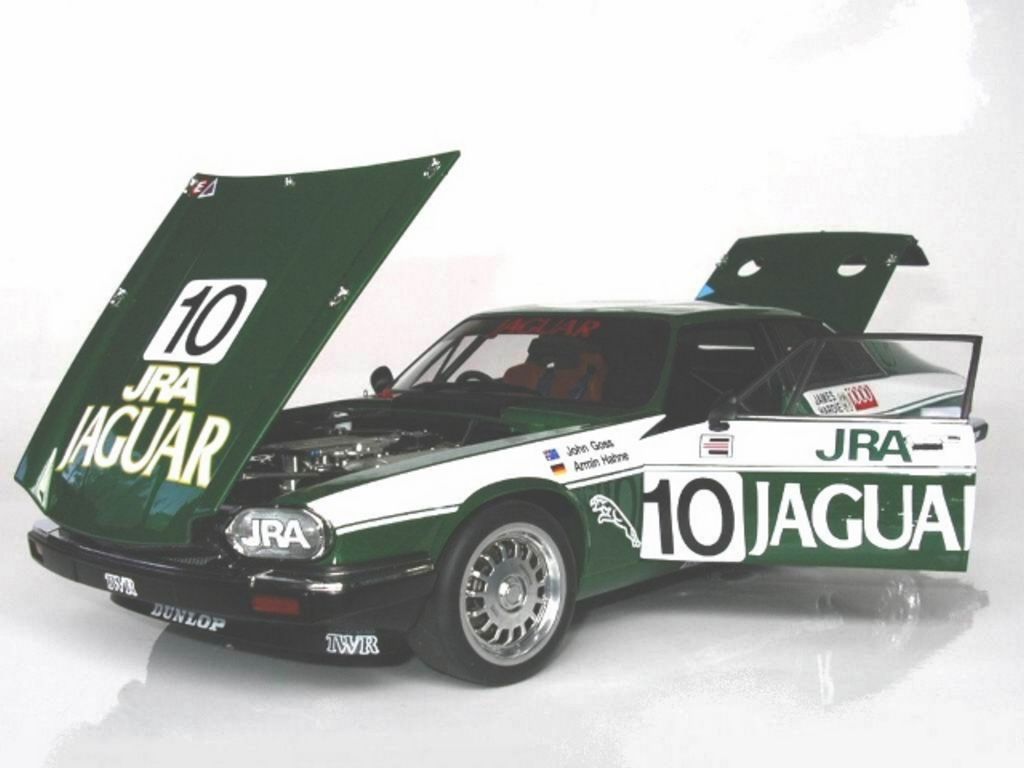 Underneath we can see some more air ducting hoses, this time directed towards the brakes, obviously to help cool the massive competition disc brakes to haul the 1400kg race car down from 170mph come race day. Interestingly, the rear disc brakes were shifted to the ‘outboard’ position allowing easier access to do a pad change if necessary. Also seen is the twin exhaust system, now re-routed to exit just in front of the left rear wheel. Talking about wheels the Speedline alloys have the finely detailed decals showing both ‘TWR’ and ‘Speedline’ on them. But these wheels are perhaps the only disappointment seen on the whole model. When studying photographs of the real car, I can’t help but notice the wheels should have a more natural dull alloy finish (like the ‘Starfish’ road car rims) rather than the shiny, high gloss rims seen here. But perhaps I am being a bit too pedantic!! 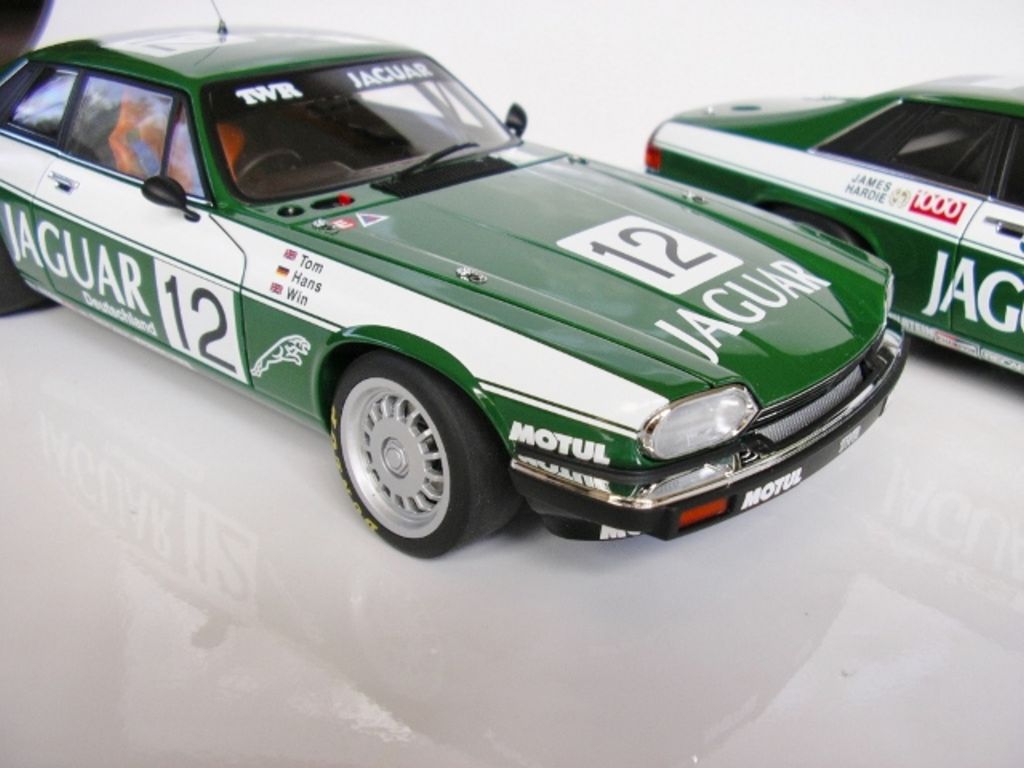 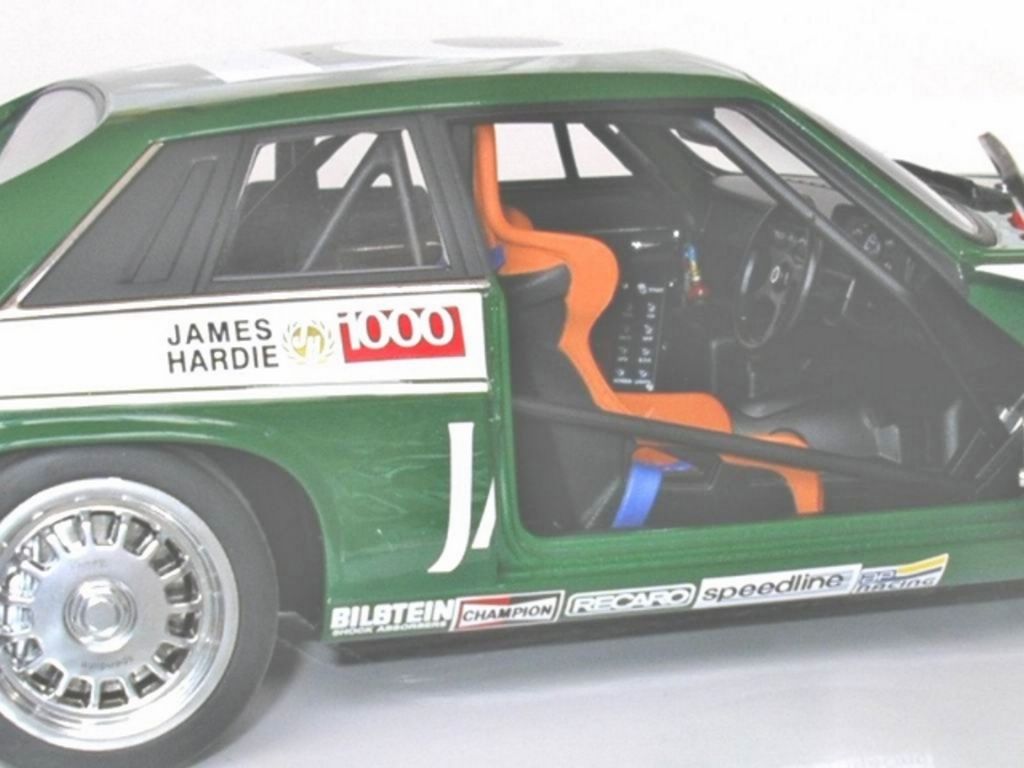 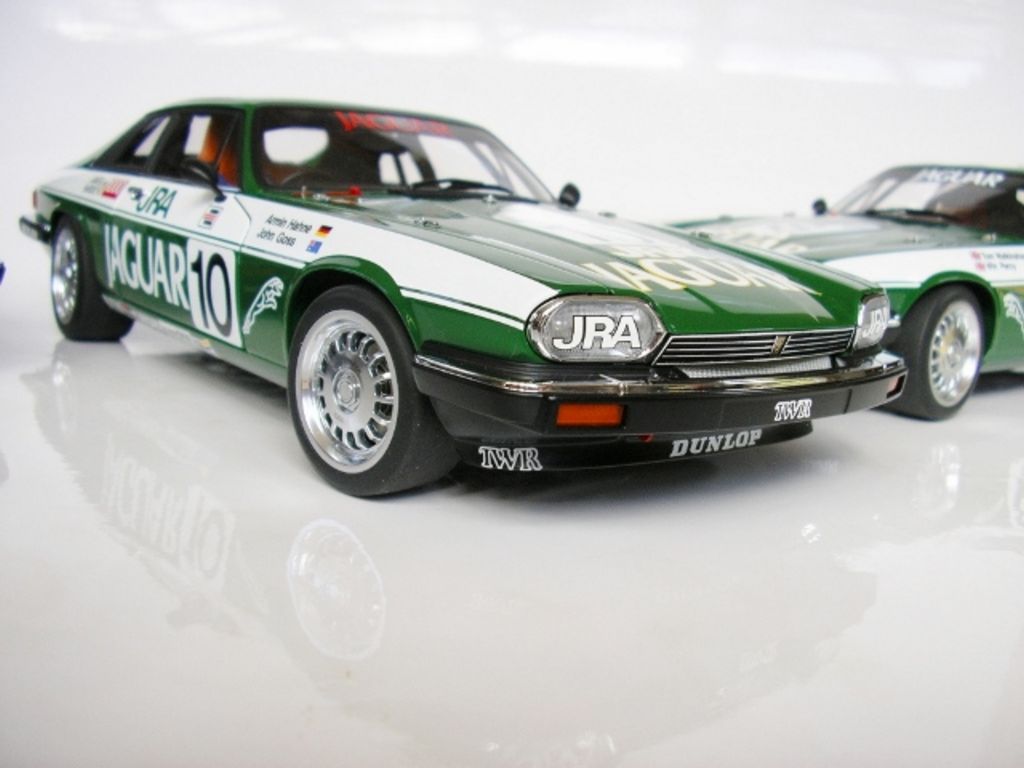 The interior is just as interesting. Obviously the road cars’ seats and trim have been stripped out, and in its place the full roll cage and racing seat are proudly displayed. In the left hand side of the cockpit are the fire extinguishers and also the control panel to enable the driver to adjust brake bias and suspension settings among other things. The dashboard and door trims are still in place as per Group A rules of the day, but the dashboard is dominated by the large rev counter directly ahead of the driver, while other gauges are either side of it along with even more in the centre of the dashboard. Also noticeable is the 5-point racing harness. Although not reproduced in an actual fabric, straps are made of a very soft, pliable vinyl with the harness buckles made in what looks like finely moulded plastic. 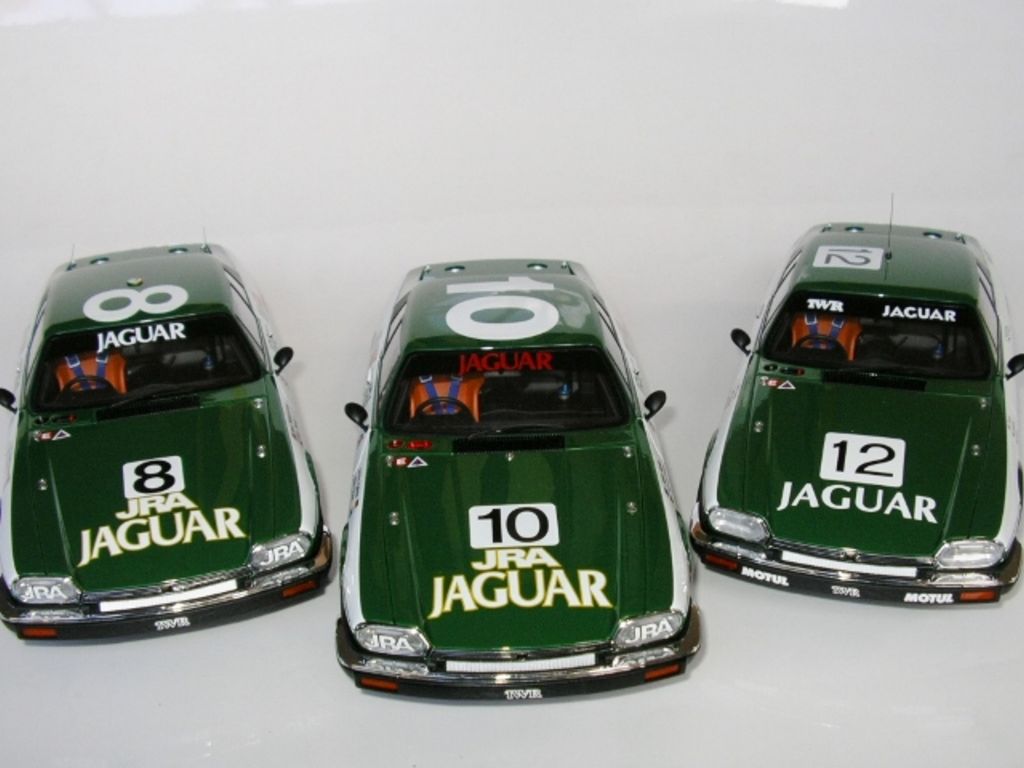 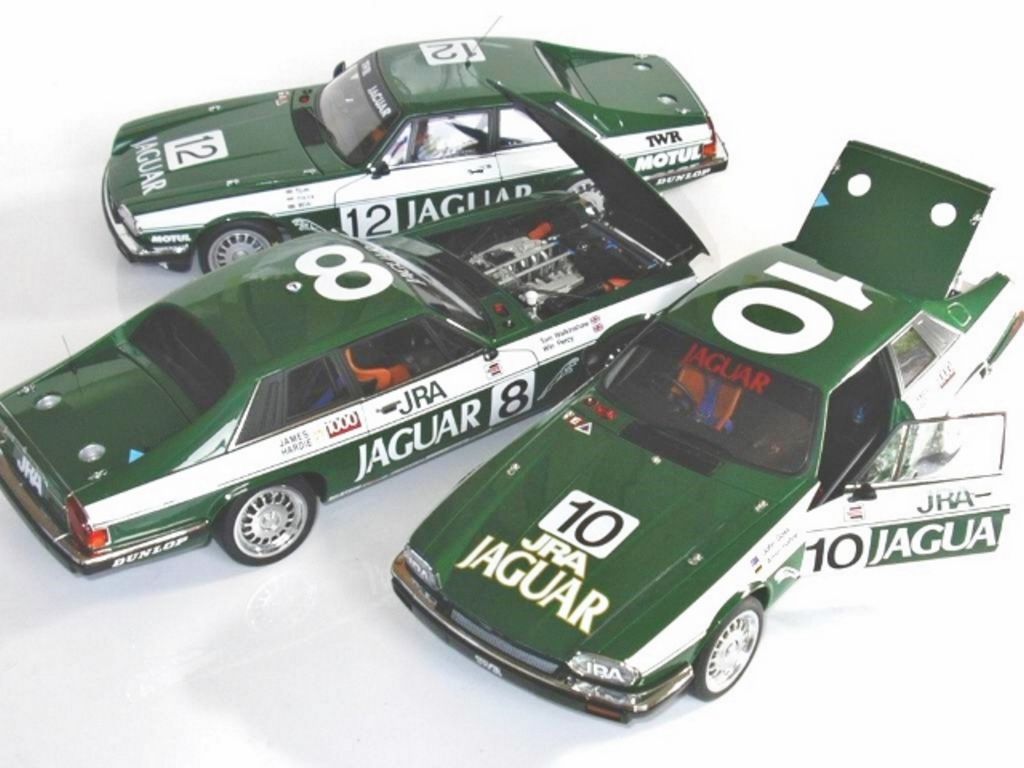 I feel AUTOart have done an outstanding job with these cars. As I mentioned earlier, the way in which the whole purposeful stance and the sleek, unassuming air of these cars has been captured, is a measure of the manufacturers ultra-high standards of capability, and is to be commended. I am fortunate enough to have all three race cars, plus the two road cars in my collection, and they all look fantastic in a group together. I also have another road car too, by a different manufacturer but sadly it doesn’t rate at all against these great AUTOart products. These models were released from about mid 2011, so perhaps may be getting a little hard to find now. 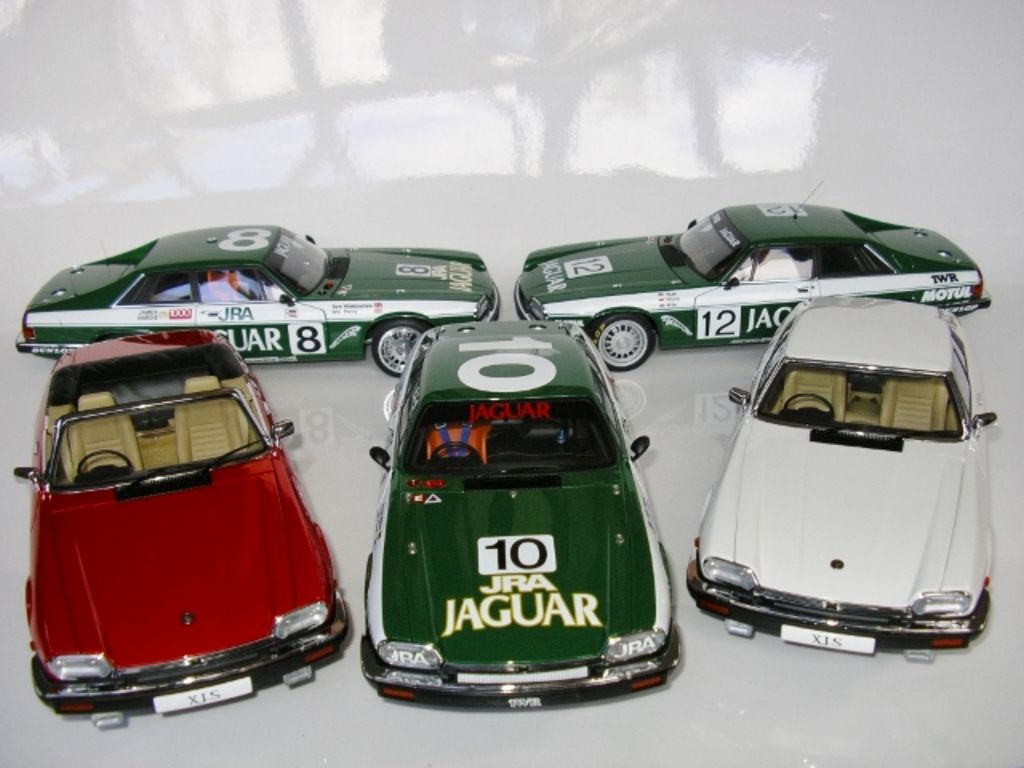